“I believe in Art as a means of transcendence and connection. My images are simply what I’ve made from what I have been given. I hope they have done justice to their sources and that they will, for a moment, stay the shadows of contentment too short lived. (Sor Juana Inés De La Cruz)” — Josephine Sacabo 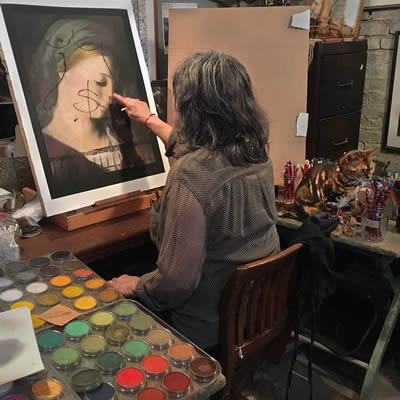 Sacabo divides her time between New Orleans and Mexico. Both places inform her work, resulting in imagery that is as dreamlike, surreal, and romantic as the places that she calls home.  Born in Laredo, Texas, in 1944, she was educated at Bard College in New York. Prior to coming to New Orleans, Sacabo lived and worked extensively in France and England. Her earlier work was in the photo-journalistic tradition and influenced by Robert Frank, Josef Koudelka, and Henri Cartier-Bresson. She now works in a very subjective, introspective style, using poetry as the genesis for her work.

Sacabo’s many portfolios are visual manifestations of the written word, and she lists poets as her most important influences, including Rilke, Baudelaire, Pedro Salinas, Vicente Huidobro, Juan Rulfo, Mallarmé, and Sor Juana Inés de la Cruz. Her images transfer the viewer into a world of constructed beauty.

During her 36-year career her work has been featured in over 40 gallery and museum exhibitions in the U.S., Europe, and Mexico. She has been the recipient of multiple awards and is included  in the permanent collections of the George Eastman House, New Orleans Museum of Art, the International Center of Photography, the Metropolitan Museum of Art, and la Bibliothéque Nationale.

You are the soul of this body and the body of this shade.